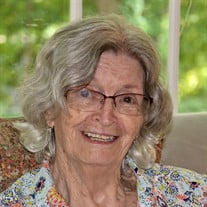 Genevieve “Genny” Bonds Reed, 88, of Salisbury passed away on Nov. 21, 2020. Genny was born on Sept. 15, 1932 in Williamston, NC. She was the daughter of the late Gladys Beecham and John Fenner Bonds. She was a graduate of Williamston High School where she participated in theater and glee club. Genny graduated from Rex Hospital School of Nursing in 1954. While attending Rex, she met the love of her life, “Charlie.” Genny and Charles “Charlie” Reed were married in 1954 in San Antonio, Tex. Charlie was unable to leave work in the Army for the weekend, so he sent his bride-to-be a plane ticket to join him in Texas, where he’d be waiting to spend forever with her. The two shared 64 wonderful years of marriage prior to his death in 2018. Genny said her proudest accomplishment was a long, happy marriage to Charlie. Charlie once again sent her a ticket, this time to heaven, where he’d be waiting to spend forever with her. Genny and Charlie resided in San Antonio, Tex., Raleigh, NC, Pensacola, Fla., Shelby, NC, Harrogate, England, Charlotte, NC, Forest City, NC and finally settled in Salisbury, NC. Genny and Charlie have three children, Lyn Gill (John), Charles “Chuck” Russell Reed, Jr. (Cammy) and Leigh Michalec, of which they were incredibly proud. Genny’s compassionate and loving nature made her an incredible nurse. She knew she wanted to be a nurse when she was 5 years old and suffered from diphtheria. She saw how the doctors and nurses helped her, and she wanted to do the same for others. After working as a RN in occupational health, Genny returned to school to become a nurse practitioner, and later earned her BSN and MSN. She was an American Association of Occupational Health Nurses Fellow and also received the honor of Great 100 Nurses of North Carolina in 1992. Genny’s nursing career ended in the mid-90s when she retired from Hoescht Celanese. After retirement, Genny worked on developing educational programs for the North Carolina Association of Occupational Health Nurses, served as a part time instructor in Gardner Webb’s BSN completion program, and volunteered with the American Cancer Society. Genny was a faithful member of Trinity Wesleyan Church in Salisbury. She loved spending time in Bible study and having lunch with her church ladies. She led many bible studies over the years, most recently including the Wellspring Bible Study group. She was a long-time member of the Salisbury-Rowan Unit of Church Women United. In 2018, Genny received Church Women United’s Human Rights Award. She deeply cherished this award and what it represented. Genny was a loving “MawMaw” to four grandchildren, Jennifer Gill Shukla (Sanjai), Jeffrey Gill, Russell Michalec (Sarah) and Lindsey Reed; and three great grandchildren, Arjun and Jay Shukla and Hank Michalec. She and Charlie loved nothing more than being surrounded by their family. Ordinary days felt like holidays in their home when family gathered. Aside from nursing, her life’s work was spoiling her children and grandchildren. She loved them fervently. She loved all people - friends, neighbors, strangers. Genny always left people better than she found them, and as result, most never forgot her. Her Christian heart, loving parents and encouragement from Charlie led her to always help others. Genny knew her Lord had so deeply blessed her, that she always felt it necessary to give to others. Genny loved to sing. Charlie often played the piano in their home while Genny sang along. While she’d tell you she was not blessed at cooking when she was first married, she sure taught herself a thing or two. So much so that her grandchildren placed a sign in her kitchen that read, “In this house we must wear elastic pants, because Grandma can cook.” She loved traveling near and far to visit friends and family, and to watch her grandson Russell play baseball. She was always ready for her next adventure, whether it was to Belk or the American Legion Baseball World Series in North Dakota. The joy and love she brought to a room will be deeply missed. Genny's legacy will live on through her children, grandchildren, great grandchildren; her sisters Margie Bonds Manning (Ronnie) and Ruth Bonds Silverthorne; and her sisters in law, Jackie Bonds and Gail Bonds. Her parents; brothers, Allen Bonds (Jackie) and Noah Ray Bonds (Gail); sister, Frankie Bonds Meeks; and the love of her life, Charles Russell Reed precede her in death. Arrangements: We know family and friends from near and far would love to celebrate Genny. In light of the pandemic, close family and friends will gather on December 3 at 2 p.m. We ask that you remember the love she had for each of you during this time. Memorials: In lieu of flowers, memorials can be made to Trinity Living Center of Salisbury or Trellis Supportive Care of Rowan. Summersett Funeral Home is serving the Reed family. Online condolences may be made at www.summersettfuneralhome.com.

The family of Genevieve Bonds Reed created this Life Tributes page to make it easy to share your memories.

Genevieve “Genny” Bonds Reed, 88, of Salisbury passed away on...

Send flowers to the Reed family.