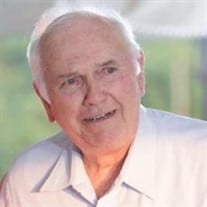 Franklin Monroe Yost, 85, of Salisbury, NC passed away at his residence on Saturday evening, November 21st. Born June 29, 1935 to Jacob Monroe Yost and Elma Cauble Yost, Frank began and ended his life on their family farm in Salisbury. He was a graduate of China Grove High School. Frank devoted his life to God, his family, agriculture, and his country. Frank married his childhood sweetheart, Joyce Carolyn Leazer, and they started their married life in San Diego, CA. He served in NC Air National Guard, then transitioned to the US Air Force where he served for 15 years with the rank of Sergeant. He served at James Connally Air Force Base in Texas, Spangdahlem Air Force Base in Germany and Shaw Air Force Base in South Carolina and in Thailand in the early stages of reconnaissance of the pre-Vietnam War. He attended San Diego State University and Baylor University. Upon returning home, Frank and his family tended corn, wheat, soybeans, alfalfa, and black angus cattle. During that time, he also worked for Fiber Industries until his retirement as a Maintenance Supervisor. Frank was a member of the Harold B. Jarrett American Legion, where he served a term as Commander, and a member of the Elks Club 699. He was a lifelong member of St. Mark’s Lutheran Church in Salisbury, where he served on the Church Council and numerous committees. He was an avid traveler with the Airstream Club and an authority on aircraft and tractors – especially his favorite tractor, Twinkie. Left to cherish his memory, sense of humor, and work ethic are his wife of 66 years Joyce Leazer Yost, son William Yost (Anita), daughter Jo Ann Yost Williams (Franklin), son Andrew Yost (Amy), grandchildren Laura Jane Ferguson (Tyler), Megan Nasuti (Peter), Mary Beth Sowers (Tyler), Ben Yost, Alex Yost, and Mason Yost, two great-grandchildren Leo Franklin Nasuti and Emma Loflin, his sweet dog Tinker-Bell, his brother Don, sister-in-law Debbie (David) Fleming, brother-in-law Bob Brown and numerous nieces, nephews, and cousins. A Private Service will be held for the family. In lieu of flowers, the family request contributions be made to St. Mark’s Lutheran Church, 5202 Mooresville Road, Salisbury, NC 28147. Summersett Funeral Home is serving the Yost family. Online condolences may be made at www.summersettfuneralhome.com.

Franklin Monroe Yost, 85, of Salisbury, NC passed away at his residence on Saturday evening, November 21st. Born June 29, 1935 to Jacob Monroe Yost and Elma Cauble Yost, Frank began and ended his life on their family farm in Salisbury. He was... View Obituary & Service Information

The family of Franklin Monroe Yost created this Life Tributes page to make it easy to share your memories.

Franklin Monroe Yost, 85, of Salisbury, NC passed away at his...

Send flowers to the Yost family.