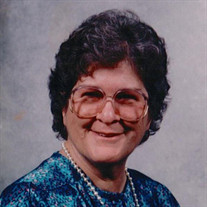 Frances LaFrage, beloved mother, grandmother, and pastor’s wife, entered the presence of the Lord on August 4, 2021. The former Frances Delores Garner, daughter of the late Alex Garner and Juanita Hughes Garner, was born on August 23, 1936 in Okemah, Oklahoma and raised in southern California. Frances graduated from Tulare Union High School in Tulare, California where she was voted Outstanding Senior, involved in FHA, orchestra, and Bible club. Her high school yearbook stated she would attend Bible college and marry a preacher. Frances attended Life Bible College in Los Angeles, California where her minister introduced her to A1C Joseph Shahane LaFrage. They married July 3, 1957, three months after their first date. As a wife, Frances loved her husband and supported his call to the ministry of Jesus Christ. Together the LaFrage’s pastored Pentecostal churches across the United States, including Jackson, Tennessee, Merced, Clovis, and Fairfield, California and Salisbury, North Carolina. Frances’ favorite place to be was church. She established two church daycare centers, enjoyed leadership roles with the Christian Youth, women’s ministries, nursing home ministries, Sunday school department and mission outreach. At her heart, Frances was a listener and friend. She made herself available to those needing compassion and support. Her home was always open and there was always a seat at her table. She epitomized Hebrews 13:2, “Be not forgetful to entertain strangers: for thereby some have entertained angels unawares.” Frances enjoyed sewing, crocheting, journaling, and traveling with her grandchildren, especially to the ocean. She was a descendent of survivors of the Trail of Tears, and a member of the Cherokee Nation. Throughout her life, Frances was employed by Texas Oil Company, Security First National Bank and Rowan Memorial Hospital. Left to cherish her memory is her husband of 64 years, Reverend Joseph LaFrage. Sons, David LaFrage, Edward LaFrage and daughter, Connie Edwards (Dale) all of Salisbury. Grandchildren, Elizabeth, Shane (Alika), Mary Lynn and Alex Edwards. Great grandchildren, Kesler and Kadyn. Brothers, Kirk Garner (Luz) of California, Gregory Garner (Celi) of Idaho and many nieces and nephews. The family will receive friends at 11am, Thursday, August 12, 2021 at Summersett Funeral Home. Service will follow at 12pm in the chapel with Rev. Joseph LaFrage and Rev. Jerry Snipes officiating. Burial will be at the Salisbury National Cemetery. Memorials and condolences may be sent to the Salisbury Church of God, 1715 Second Street, Salisbury, North Carolina 28144. Summersett Funeral Home is serving the LaFrage family. Online condolences may be made at www.summersettfuneralhome.com.

The family of Frances LaFrage created this Life Tributes page to make it easy to share your memories.

Send flowers to the LaFrage family.