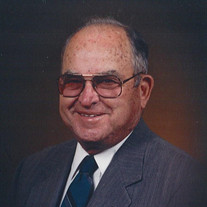 Floyd Monk Burton, 100 years old, went home to be with the Lord and his beloved wife Dot on October 9, 2020. He and Dot were married for 70 years before her death in 2009. He was born on December 28, 1919 to the late Jesse Robert and Gladys... View Obituary & Service Information

The family of Floyd Monk Burton created this Life Tributes page to make it easy to share your memories.

Send flowers to the Burton family.