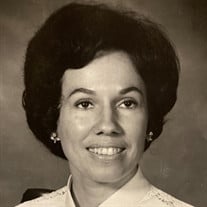 Elizabeth Anne Withers Smith, lovingly known as "Bobo," of Salisbury, North Carolina, died on Saturday, April 24, 2021. Elizabeth Anne Withers Smith was preceded in death by her husband of forty-three years Addison Neal Smith, Sr. She and Neal met while in a play together at Piedmont Players in Salisbury, North Carolina. They were married on August 29, 1965, at Woodleaf United Methodist Church. Their love and commitment to each other remained steadfast for all time. She is survived by their four children, Mary Beth Smith of Salisbury; Addison Neal Smith, Jr. and wife Donna Smith of Garner; Todd R. Spencer (Smith) of Salisbury; Anna Smith Felts and husband James Felts of Raleigh; and three beloved grandchildren, Katherine Addison Smith; Augustus Lee Spencer; and Alana Addison Felts. She is also survived by numerous very special nieces and nephews. Born on December 5, 1940, in Spencer, North Carolina, Smith was the daughter of the late Benjamin Roscoe Withers and Sallie Mattox Withers. The last surviving child of their seven children, Smith was preceded in death by her siblings Sarah Withers Keesee; Martha Withers Agner; B. R. "Buck" Withers, Jr.; George Wesley Withers; Alene Withers Ritchie; and Abner Carr Withers. Elizabeth Anne Withers Smith was in the first graduating class and was the first Student Body President of North Rowan High School (1959). She was active in every aspect of high school including playing basketball all four years; playing trombone in the band; and serving in numerous school clubs. In her senior year Smith was voted "Best All Around" which was the top superlative at North Rowan High School. Following high school Smith graduated as a registered nurse from the three-year nursing program at Rowan Memorial Hospital School of Nursing. After graduating from nursing school, Smith worked at Methodist Hospital in Houston, Texas, which included working with world-renowned surgeon Dr. Michael DeBakey. Her career also included working with the visually impaired, and she assisted in corneal transplants which produced the life-changing result of sight for the recipients. It was an area of her work which she recalled as being among the most rewarding. She also worked for the North Carolina Division of the Blind and promoted and conducted early screening of children to detect vision issues at a young age in order to provide the most successful treatments and outcomes. Smith also worked at the National Institutes of Health (NIH) in Bethesda, Maryland; Rowan Memorial Hospital in Salisbury, North Carolina; Raleigh Community Hospital in Raleigh, North Carolina; and conducted significant pharmaceutical drug studies for Ciba Geigy. For a number of years she owned and operated her own business- an ice cream shop in Woodleaf, North Carolina, called "Brightner' s Corner" where people of all ages came not only for great ice cream but also to swap stories and pictures and to share in a sense of community. Always fully engaged in life, Smith had many interests and talents and particularly enjoyed music, writing, and photography. A trailblazer in so many aspects of her life, Smith was the first woman in Rowan County to run for the North Carolina Senate; was Secretary of the Rowan County Democratic Party; and served on the North Carolina State Democratic Executive Committee. She was a lifetime member of the Sir Walter Cabinet in Raleigh. Smith had a deep compassion for all people, especially for children, and was an original member of the Rowan County Child Abuse Prevention Task Force. She helped write the Rowan County Child Abuse Prevention Protocol for the reporting and prevention of child abuse. Of her life achievements, too many to list, she considered her family as her greatest accomplishment. She leaves them with a legacy of love, strength, and perseverance. A friend to everyone, she embraced life to the fullest and loved without hesitation or reservation. She had a way of making even the most ordinary moments special and magical. Even during times when she faced great difficulties in life, her resilient spirit; her purity of heart; her love of family and friends; and her faith in God never waivered. She leaves the world a better place because she was here and leaves those who cherish her memory better people for the gift of knowing and loving her. The funeral service and celebration of life for Elizabeth Anne Withers Smith will be held on Wednesday, May 5, 2021, at 11:00 a.m. at Woodleaf United Methodist Church in Woodleaf, North Carolina, with graveside service to follow. The family is being assisted by Summersett Funeral Home in Salisbury, North Carolina. Online condolences may be made at www.summersettfuneralhome.com

The family of Elizabeth Anne Withers Smith created this Life Tributes page to make it easy to share your memories.