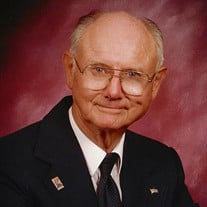 Dr. Clifford Gray Cutrell, 95, of Salisbury, NC passed away Sunday, January 16, 2022 at his daughter’s home. Dr. Cutrell was born on November 12, 1926 in Walterboro, SC to the late George Millard Cutrell and Mona Turner Cutrell. He was a graduate of Fairfield High School Class of 1943 and attended Louisburg College. He graduated from Scholl College of Podiatry in Chicago, IL in 1951. Dr. Cutrell served in the Army during WWII and was stationed in Japan during the occupation of Japan. He practiced Podiatry in Salisbury, NC from 1951 until his retirement in December 1991. He was a consultant at the W.G. Hefner VA Medical Center. Dr. Cutrell was a member of Coburn Memorial United Methodist Church where he was active on several church committees, was a member of the Homemaker’s Sunday school class and the United Methodist’s Men. He was a life-time member of the Elks Club, a life-time member of Hudson-Miller-Tatum VFW Post 3006; a member of Harold B. Jarrett American Legion Post; former member of the Salisbury Civitan Club and the Salisbury Jaycees. Dr. Cutrell was a life-member of the NC Foot & Ankle Society and the American Podiatry Association. He was an avid golfer and belonged to Corbin Hills Golf Club and the GARS (Golf Association – Rowan Seniors). Dr. Cutrell was a frequent volunteer at Rowan Helping Ministries. He was a former member of several vicinity Western Square Dance Clubs and Camping Clubs. Preceding him in death was his wife, Jane Edward Cutrell on April 17, 2013, brother, Millard Cutrell and Ira Cutrell; sister, Mildred Shell. Surviving is his daughters, Vivian Mulkey and husband Robert of Salisbury, NC and Nancy Steen and husband Thomas of Lanham, MD; grandchildren: Keith Pierce, Brad Mulkey, Michael Steen and Brian Steen; three great-grandchildren: Allison Pierce, Andrew Pierce, and Jaxon Steen. The family will receive friends from 1:00-2:00 PM, Saturday, January 22, at Summersett Funeral Home. The funeral service will follow at 2:00 PM in Summersett Memorial Chapel with Rev. Perry Bradshaw officiating. Memorials may be made to Coburn Memorial United Methodist Church, 901 S. Church Street, Salisbury, NC 28144. Summersett Funeral Home is serving the Cutrell family. Online condolences may be made at www.summersettfuneralhome.com.

Dr. Clifford Gray Cutrell, 95, of Salisbury, NC passed away Sunday, January 16, 2022 at his daughter&#8217;s home. Dr. Cutrell was born on November 12, 1926 in Walterboro, SC to the late George Millard Cutrell and Mona Turner Cutrell. He was... View Obituary & Service Information

The family of Dr. Clifford Gray Cutrell created this Life Tributes page to make it easy to share your memories.

Send flowers to the Cutrell family.