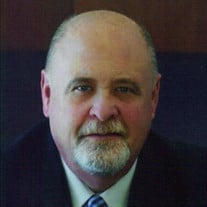 Douglas “Doug” Harvey Jones, age 62, of Salisbury passed away Saturday morning at the Glenn A. Kiser Hospice House. Mr. Jones was born on May 1st, 1958 in Kannapolis to the late Eveland Harvey Jones and Ethel Bolen Jones. He graduated from South Rowan High School in 1976. He attended Rowan-Cabarrus College and Catawba College. Doug received the distinction of LUTCF from Nationwide Insurance. He traveled to teach classes at the home office of Nationwide in Columbus, OH for several years. He was the owner of Doug Jones Nationwide Insurance for 38 years. He retired from Nationwide but remained a Senior Associate for Hiller-Ringeman Insurance for a year until his health made him retire completely. He was an active member of the community, he served on the Board of Directors for United Way, Youth Services, and Rowan Rescue Squad. He served on the Tree Board and was Vice-Chair of Rowan Housing Authority. He was also on the board for Holiday Caravan Parade and was the General Chairman for the parade in 1997. He was an active member of Milford Hills United Methodist Church where he served as a Lay Leader, Co-Chair of Missions and Chair of Peace Out and Soup & Socks for the homeless. He was most proud of the work he did to help the homeless. Those left to cherish his memory are his wife of 37 years Melody Turner Jones whom he married April 8, 1983; sister Amy Jones Ikerd of Longmont, CO; daughter Caroline Nicole Jones; sons Christopher Douglas Jones (Meredith) and Chandler Alan Jones all of Salisbury; grandchildren Jackson Ellis Jones and Charlotte Frances Jones; mother-in-law Frances Eloise Turner and sister and brother-in-law David and Sherry Paschall of Rockwell; several uncles, aunts and cousins. Memorial Service: 1:00 PM, Friday, October 23, 2020 at Summersett Funeral Home conducted by Rev. Jim Parsons and Rev. Kelly Shrader. Due to the Covid-19 concerns the service will be held outside and masks are encouraged to be worn. The family wishes to extend a special thank you to Dr Chetan Amin and all the nurses at the Glenn A. Kiser Hospice House and a special thank you to Karen and Tiffany who cared for him at home. Memorials: In lieu of flowers, memorials may be made to Milford Hills United Methodist Church, 1630 Statesville Blvd., Salisbury, NC 28144. Summersett Funeral Home is serving the Jones family. Online condolences may be made at www.summersettfuneralhome.com.

Douglas &#8220;Doug&#8221; Harvey Jones, age 62, of Salisbury passed away Saturday morning at the Glenn A. Kiser Hospice House. Mr. Jones was born on May 1st, 1958 in Kannapolis to the late Eveland Harvey Jones and Ethel Bolen Jones. He graduated... View Obituary & Service Information

The family of Mr. Douglas H. Jones created this Life Tributes page to make it easy to share your memories.

Send flowers to the Jones family.