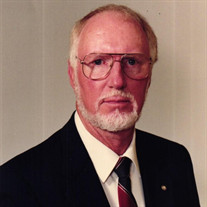 David Philip West, loving husband, father, and grandfather, completed his earthly journey at age 83 on January 31st, 2022. The resilience, courage, and grace he showed in his final years was an inspiration for all of us and were the measure of this fine man. He was born in Forsyth County, a son of the late James Holroyd West and Catherine Cecil West. Dave grew up in Salisbury, graduated from Boyden High School in 1956, and went on to the University of South Carolina, where he graduated with a B.S. in geology, class of 1961. After adventures in Cuba, Mexico, and the American southwest, Dave proudly served his country in the US Army. He was stationed at Fort Bragg, competing with distinction for the post rifle team. Dave was a member of the Episcopal Church of the Messiah in Rockingham, serving on the vestry and as senior warden. He was a proud member of the Rotary Club of Rockingham, serving as club secretary for four years and named Rotarian of the year in 2004. Dave began his career at B.V. Hedrick Sand & Gravel in Lilesville, NC, where he served as superintendent until his retirement in 2000 after more than 36 years. He enjoyed keeping in touch with many people there and following the company's activities. Following retirement, Dave and wife, Fran, acquired the old Dr. Sorrell place outside of Lilesville, renaming it Wheelbarrow Farm. For over 21 years they and their family worked to restore this unique property, gardening, building, and serving as stewards of the land. Dave reveled in the hard work and strenuous outdoor life, then admiring it all at the end of the day from his favorite rocking chair. Wheelbarrow Farm, and the inspiration and renewal it has provided will continue to be an enduring legacy for the entire family. The spirit and memory of Dave West - husband, father, Papa - will live on with every tug of a fish on the line, with the crackling of a good fire in the fireplaces, with the beauty of the sparkling lake, and with the countless wonders of the place he and Fran provided - our own slice of heaven here on earth. Those left to cherish his memory include his wife of 59 years, Frances Wagoner West, and sons Ralph Daniel West of Cary, NC (Bill), David Philip West Jr of Middlebury, VT (Lee), Edward Walter West of Salisbury, MD (Katherine), and William Norvell West of Wilmington, NC, and Amy Stewart. Dave's beloved grandchildren are Maggie, Harrison, Connor, Hannah, Claire, Jonathan, and Alex - all Wests. We are thinking with endless gratitude of Janet K Marrison and Tracie S West. In addition to his parents, Dave was preceded in death by his siblings, Dianne W McMillan and James H West Jr. In Rockingham, the family will greet friends at the home on Saturday, February 5th, from 2:00 until 4:00 pm. A graveside service will be held at Chestnut Hill Cemetery in Salisbury, NC on Saturday, March 26, 2022 at 1 PM, officiated by Rev. Dr. Robert Black. Memorials may be made to the charity of your choice. Summersett Funeral Home is serving the West family. Online condolences may be made at wwwsummersettfuneralhome.com.

David Philip West, loving husband, father, and grandfather, completed his earthly journey at age 83 on January 31st, 2022. The resilience, courage, and grace he showed in his final years was an inspiration for all of us and were the measure... View Obituary & Service Information

The family of David Philip West created this Life Tributes page to make it easy to share your memories.

Send flowers to the West family.