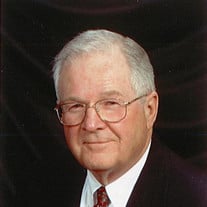 David Everette Setzer, 85, entered into eternal life on Aug. 4, 2020. Born Oct. 7, 1934, he was the son of the late Everette L. and Era Love Setzer. A native of New London, he graduated from the University of North Carolina at Chapel Hill with a degree in radio and television, and spent four years in the Air Force. He served in the Public Information section at Offutt Air Force Base in Omaha, Nebraska, and also deployed to Saudi Arabia. Returning home in 1961, he went by The Salisbury Post to visit then editor George Raynor, who promised to make some inquiries for him. Eventually Raynor told him, “Go out to Catawba to see Dr. A.R. Keppel.” Keppel, who was college president, hired Setzer two days later, and Setzer spent the next 36 years at the college working in public relations. He served under six different presidents. During his tenure, he served as director of public relations, acting director of development, supervisor of buildings and grounds and housekeeping, executive assistant to the president and vice president for communications. He met his future wife, Barbara Anne Grimmie, on his first day on campus. She was a senior, and they figured they’d get in trouble for dating. They didn’t. Shortly after Barbara’s graduation, they were married in July 21, 1962, on the bride’s front lawn in Berlin, N.J., by the mayor. They had two children, Dana Setzer Curry and Mark David Setzer, both of Salisbury. Setzer is also survived by a son-in-law, Eugene “Buddy” Curry. At Catawba, in addition to receiving numerous graphic arts awards, he received the Algernon Sydney Sullivan Award, the Trustee Award, and the Fisher Service Award. The students dedicated the yearbook to him in 1970. In 2012, Setzer was honored with the David E. Setzer Endowed Scholarship for students majoring in English with a writing concentration. In 1979, Setzer and his father, an experienced carver, donated a totem pole to Catawba’s Shuford Stadium before the season opener football game against Liberty Baptist. It still stands today. When Setzer was ready to retire from Catawba in 1997, then President Fred Corriher, a member of the newly formed Blanche & Julian Robertson Family Foundation, asked him to apply to be its first executive director. “I knew he was very talented and very detail oriented,” Corriher said. “I thought he was perfect for the job.” “There could not have been a better person at a better time,” said Margaret Kluttz, past president of the Robertson Foundation following a long tenure by the late Jim Hurley. “He was at the heart of the foundation. He understood and appreciated local non-profit organizations, those people who are working in the trenches. He’s been a champion for the community, there’s no question about it.” During his tenure with the foundation, Setzer, with Dave Jordan, served as co-chairman for the $5.5 million expansion of Rowan Helping Ministries. Setzer had met Julian Robertson — who gave $15 million to start the foundation — through Catawba College’s business symposiums, and was impressed. And he’d known Robertson’s parents, Julian and Blanche Robertson, through St. Luke’s Episcopal Church, where the Setzers are longtime members. At St. Luke’s, Setzer was a senior warden of the vestry, Every Member Canvass chairman, lay reader, and chalice bearer. Robertson gave the board free rein in going about its business over the years. “Keep doing what you’re doing,” he’d often tell them. “You’re doing great!” And it wasn’t unusual for Setzer to get handwritten checks in the mail from Robertson — for $1 million or for $5 million or for $7 million. It was always a thrill. “David has been key in making the foundation so successful,” Robertson said when Setzer retired from the foundation. “I have always been confident in the people who serve on the board of the foundation, and it is they who found David. He has been such a shining star. We will miss him greatly and wish him all the best in the years ahead.” When Setzer retired a second time, he was given the key to the city. In the community, Setzer served the United Way, Heart Fund, Salisbury-Rowan Chamber of Commerce, National Sportscasters & Sportswriters Association, Historic Salisbury Foundation (trustee), and Waterworks Visual Arts Center. Setzer absolutely loved Superman, and he and his daughter often joked that he looked a lot like Clark Kent. His daughter found a quote by Superman actor Christopher Reeve that her dad saved: “A hero is an ordinary individual who finds the strength to persevere and endure in spite of overwhelming obstacles.” “I can say with assurance that Dad is and was my hero in life,” his daughter said. “He shared his strength with me to persevere and endure in spite of overwhelming obstacles.” Due to Covid-19 private services will be held. Memorials may be made to St. Luke’s Episcopal Church, 131 W. Council St., Salisbury, NC 28144, or to Catawba College, 2300 W. Innes St., Salisbury, NC 28144. Summersett Funeral Home is serving the Setzer family. Online condolences may be made at www.summersettfuneralhome.com.

David Everette Setzer, 85, entered into eternal life on Aug. 4, 2020. Born Oct. 7, 1934, he was the son of the late Everette L. and Era Love Setzer. A native of New London, he graduated from the University of North Carolina at Chapel Hill with... View Obituary & Service Information

The family of David Everette Setzer created this Life Tributes page to make it easy to share your memories.

Send flowers to the Setzer family.