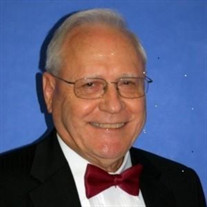 Darrell Clifton Carper, 84, of Woodleaf, North Carolina, entered into eternal life on January 1, 2021 at Novant Health Glenn A. Kiser Hospice House of Salisbury, NC. Born July 16, 1936 in Amma, West Virginia, he was the son of the late Jake Carper and Madge (Pickens) Carper. He was a graduate of Spencer High School, Spencer, West Virginia, Cuyahoga Community College, Cleveland, Ohio, and Baldwin Wallace College, Berea, Ohio. Darrell began his career as a clerk in a paint store and through perseverance and hard work, ended his career with retirement as the Corporate Financial Controller of Norandal. Darrell was a devoted husband of 62 years to Ruth Carper. He faithfully provided for her and their family including caring for her during her extended illness in the last years of her life. He was an involved father and supported all of his daughter’s activities, serving as the voice of the Brunswick High School Marching Blue Devils, even after his children graduated. He was a devoted band, choir, dance and theater Dad, and served as President of Band Boosters, as well as various other school committees. Darrell was a lover of music and sang for many years in the Cornerstone and then the Sounds of Praise gospel quartets. He served as choir member and volunteer music director for churches that he attended throughout the years. He remained active during his retirement years as a member of the Salisbury Swing Band in addition to serving as treasurer of the Rowan Baptist Association and providing accounting services to various churches in the area. Darrell’s faith in God was the defining principle of his life. He served as Deacon and Sunday School Teacher, as well as on various church committees for most of his life. He lived what he believed, served God with commitment and a sense of humor, and prided himself in setting that example for every life he touched. Through his Christian influence as a corporate leader, church music director, deacon, jazz trombone player, friend and family man, many lives have been changed. In addition to his parents, he was preceded in death by his infant son, Ronald Clifton Carper; Brother Charles Calvin Carper and wife Mary; Sister Winifred Carper Thumm and husband Theodore Basil; Sister Doris Carper Proctor Taylor and husband Frank; and sister Eloise Carper Roberts and husband Howard. Left to cherish his memory are his daughter Linda Diane Carper of Cleveland, Ohio; daughter Joi Annette Carper Chapman and her husband Michael of Franklin, North Carolina; daughter Sandra Carper Keels and her husband Mark of Nebo, NC; Grandson Joshua Clifton Henry and his wife Star of Sophia, NC; Granddaughter Rachael Nicole Henry Johnson and her husband Kevin of New York, New York ; Granddaughter Leah Paige Henry of Franklin, NC; Granddaughter Aidan Danielle Keels of Marion, NC; Granddaughter Lauren Faith Keels of Marion, NC; great-grandchildren Sakura, Katherine and Kirsten; and many nieces, nephews and friends. Services: Burial service will be on Saturday, January 9, 2021_at 12:00 p.m. at Amma Cemetery in Amma, West Virginia. Due to Covid-19 restrictions, a Memorial service will be scheduled for a later date to allow friends and family to celebrate Darrell’s life. Memorials: In lieu of flowers, donations can be made to the Salisbury Swing Band,240 Palomino Drive, Salisbury, NC 28146; Rowan Baptist Association-832 South Main Street Salisbury, NC 28144; or Novant Health Glenn A Kiser Hospice House, 1229 Statesville Blvd Salisbury, NC 28144. Summerset funeral home is serving the Carper family. Online condolences may be left at www.summersettfuneralhome.com.

The family of Darrell Clifton Carper created this Life Tributes page to make it easy to share your memories.

Send flowers to the Carper family.