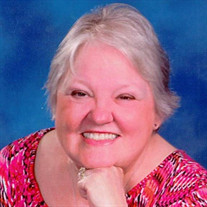 Mrs. Cynthia “Cindy” Ramsey Pope, 72, passed away peacefully at Liberty Commons Nursing Home on March 20, 2022 after a period of declining health. She was a beloved wife, mother, and grandmother. She was born on July 8th, 1949 to Jack Alden Ramsey, Sr. and Jean Kirk Ramsey. Those left to cherish her memory are her loving husband, James “Jim” Gilmer Pope, Jr, whom she married on August 24, 1969; her children, James “Jamie” Gilmer Pope, III of Portland, OR, Tara Melissa Pope Gardner (Adam) of Salisbury, NC and Stacey Evelyn Pope Furr (Allen) of Albemarle, NC; her grandchildren, James “Jay” Gilmer Pope, IV, Eden Rose Pope, Elizabeth Reagan “Lizzie”Furr, William “Will” Allen Furr, Jr., and Benjamin “Ben” Michael Furr. She is also survived by her brother, Jack Alden Ramsey Jr. (Pat), her sister, Sarah Virginia Ramsey Brooks (Bill), her niece, Heather Lynn Ramsey and her nephew, John Ramsey (Rita). Cindy graduated from Boyden High School in 1967. It was there she met her husband, Jim. She attended Appalachian State University from 1967-1968, then finished at Western Carolina University in 1971. Cindy loved being a science teacher and taught for 27 years at North Middle School, North Elementary School, Corriher-Lipe Middle School, and Southeast Middle School. She also enjoyed being a mother and homemaker full-time for 13 years. Throughout her life, Cindy enjoyed sending cards to people, reading, and cooking. She was a big Duke basketball fan and liked to watch them play. Mostly she loved spending time with her family. She was an active member of the community at First United Methodist Church in China Grove and was a part of the Mission Seekers Circle and Women in Touch, a Bible study group at FUMC. She was also a member of the Daughters of the American Revolution, John Knox Chapter, and a member of Alpha Delta Kappa International Sorority, M.U. Chapter. She was a lifetime member of both a canasta club and a bridge club. She will be greatly missed by her friends and family. Service: Services will be held on Thursday (Mar. 24) at 1:00 pm at First United Methodist Church, 110 West Church Street, China Grove, officiated by Rev. William Van Wieren, III. Interment will follow at Rowan Memorial Park in Salisbury, NC. Visitation: Due to ongoing COVID infections and out of respect and concern for our vulnerable family, friends, and church congregation, there will be no visitation. Memorials: In lieu of flowers, memorials may be made to First United Methodist Church, 110 West Church Street, China Grove, NC 28023. Cindy and family want to extend thanks to both Liberty Commons and Home Instead for their excellent care and compassion. Summersett Funeral Home is serving the Pope family. Online condolences may be made at www.summersettfuneralhome.com.

Mrs. Cynthia &#8220;Cindy&#8221; Ramsey Pope, 72, passed away peacefully at Liberty Commons Nursing Home on March 20, 2022 after a period of declining health. She was a beloved wife, mother, and grandmother. She was born on July 8th, 1949... View Obituary & Service Information

The family of Cynthia Ramsey Pope created this Life Tributes page to make it easy to share your memories.

Send flowers to the Pope family.