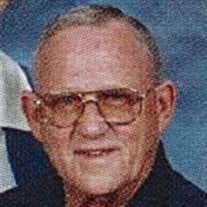 Conrad D. Gardner, 85, of Salisbury, NC passed away Monday, March 15, 2020 at The Novant Health Glenn A. Kiser Hospice House. Connie was born November 16,1934 in Rowan County, NC to the late Robert F. and Elma J Gardner. He graduated from Boyden High School in 1953, served in the Army for 4 years, then later graduated from Catawba College with a major in Physical Education and his teaching certificate. Connie spent his career working at Zimmerman’s Department Store until it closed in 1988, then later worked in various sales roles within the community. A member of St. John’s Lutheran Church, Connie was also a lifelong football fan after playing in both high school and college, an avid bird watcher, and enjoyed gathering with his friends at the American Legion and VFW. Connie was preceded in death by his wife Corinna B. Gardner on December 1, 2016. He is survived by his daughter, Sandra Gardner Sullivan and husband Rob; son, Steven Conrad Gardner; grandchildren, Robert and Katherine Sullivan, Christopher, Bradley, and Jack Gardner; and great-granddaughter Lily Gardner. A private graveside service for family and friends will be held at Rowan Memorial Park. In lieu of flowers, memorials may be made to St. John's Lutheran Church, 200 W Innes Street, Salisbury, NC 28144 or the Novant Health Glenn A. Kiser Hospice House, 1229 Statesville Blvd, Salisbury, NC 28144. Summersett Funeral Home is serving the Gardner family. Online condolences may be made at www.summersettfuneralhome.com.

The family of Conrad D. Gardner created this Life Tributes page to make it easy to share your memories.

Send flowers to the Gardner family.