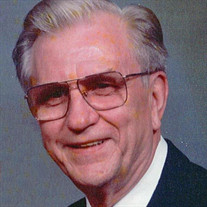 Clifton Ellis Wingate, age 93, of Salisbury, NC, passed away on September 14, 2020. Mr. Wingate was born July 24, 1927 in Burlington, NC. He was the son of the late Jesse Hopkins Wingate and Minnie Brown Wingate. Cliff was a devoted husband, brother, father, grandfather and father-in-law. Cliff married the love of his life, Louise Parker Wingate, on May 27, 1950. Their 70 year marriage was an inspiration to all. Cliff loved to share stories of their wonderful marriage. It was a once in a lifetime marriage which was certainly created in heaven. Louise preceded Cliff in death on June 8, 2020. Cliff joyfully anticipated their heavenly reunion. Mr. Wingate grew up in the Sumter, SC area. He and his five brothers and sisters were extremely close. The loving family bond he developed from his youth molded him into the loving man he became as an adult. He loved people and loved to talk and to share stories with all who would listen. His quick wit made every story unique. Many have been touched by his stories of faith. He was a member and served in many capacities of the First Baptist Church of Salisbury. His testimony of his love of the Lord was a witness to many. He also shared to all how blessed he was to have a devoted wife as well as one daughter, Beverly, whom he adored almost as much as she adored him. His two grandchildren, Jonathan and Brittany, had a very close bond with their grandfather. They looked up to him as a role model and mentor. Cliff was affectionately known as the “Bird Man”. He developed the special talent of developing bird houses. His hobby was a delight to many family and friends who will always cherish his handcraft. Mr. Wingate began his professional career at the early age of 15. He was hired as a shoe salesman for Rayless Department Store in Sumpter, SC. He moved to Statesville as a store manager and later moved to the Salisbury store in 1955. His strong work ethic promoted him to store supervisor of the East Coast and finally served as the President of the company. After his retirement he worked there as a consultant. Cliff’s life will be forever cherished in the lives of his only child, Beverly, and husband, Lee West; his grandson, Jonathan West and wife Pamela; his granddaughter, Brittany West; and his many cherished nieces and nephews. He was preceded in death by his parents, his wife, Louise, as well as his brothers and sisters: David (DH), Jesse (Buck), Robert (Carl) Wingate, Elouise Morris, Margaret Hughes. A service to celebrate his life will be held Saturday, September 19, at 11:00 AM at Rowan Memorial Park conducted by Rev. Dr. Kenneth Lance. Military Rites will be provided by the Rowan County Veterans Honor Guard. In lieu of flowers, memorials may be made to First Baptist Church, 223 N. Fulton Street, Salisbury, NC, 28144, or to St. Jude Children’s Research Hospital, 501 St. Jude Place, Memphis, TN 38105-1905. Summersett Funeral Home is serving the Wingate family. Online condolences may be made at www.summersettfuneralhome.com.

Clifton Ellis Wingate, age 93, of Salisbury, NC, passed away on September 14, 2020. Mr. Wingate was born July 24, 1927 in Burlington, NC. He was the son of the late Jesse Hopkins Wingate and Minnie Brown Wingate. Cliff was a devoted husband,... View Obituary & Service Information

The family of Clifton Ellis Wingate created this Life Tributes page to make it easy to share your memories.

Send flowers to the Wingate family.