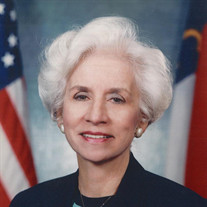 Charlotte Ancher Gardner, 88, passed away on June 10, 2020, at the Tucker Hospice House in Kannapolis, NC. Mrs. Gardner was born November 14, 1931 in Baltimore, Maryland to Marcel and Charlotte Knapp Ancher. She was preceded in death by her mother, Charlotte A. Palmer; father, Marcel Ancher; husband, Lester E. Gardner; daughter, Jeanne D. Gardner; son, Ted A. Gardner; and daughter-in-law, Bettina M. Gardner. She was educated at St. Anne’s and St. Anthony’s parochial schools in Baltimore, MD before moving to Rockwell, NC. She then graduated from Rockwell High School in 1949 with the honor of being second in her class. She continued her education at Catawba College where she graduated in 1952 after just three years with an AB in English and French and with the distinction of Cum Laude. After college, she married Lester E. Gardner in 1952. They went on to raise six children. Before having children, she became employed as a high school teacher and taught school in both Robeson and Jones county. She returned to Rowan County in 1955 and worked as a teacher, teacher’s aide, substitute teacher, and temporary interviewer at the Employment Security Commission. Charlotte was a current member of Sacred Heart Catholic Church and actively participated in the annual bazaar, St. Anne’s Circle, and Catholic daughters. She served as a Past Secretary and Regent of the Catholic Daughters of America, in addition to her many other notable roles within Salisbury’s faith community. Past memberships include: N.C. Right to Life, Rowan County Humane Society, MADD (Director, 1984-85; Vice-President, 1982-1984), Choral Society, and Altrusa. She was a leader in both Boy and Girl Scouts of America, Trustee, Vice-President, Rowan Advocates for the Mentally Ill, Board of Directors, Pregnancy Counseling Center; Board of Directors, Families in Action for Drug Free Youth; and Chairman, Salisbury-Rowan Mayors Council for Persons with Disabilities. She served as Assistant treasurer and treasurer of Junior Woman’s Club, president of Sacred Heart PTA, Vice-Chairman of the Milford Hills GOP Precinct, and Vice-President of the Rowan County Republican Party. She also volunteered at Meals-on-wheels. In 1985, Charlotte was the first woman Rowan County elected as a member of the N.C. House of Representatives and served for 16 years. She served as Secretary-Treasurer, Women’s Legislative Caucus, 1999-2000. She was a member of many boards and commissions during her service: Corresponding Secretary, Region 3, National Order of Women Legislators; Advisory Board, Women’s Network National Conference of State Legislators; Co-Chair, N.C. Study Commission on Mental Health, Developmental Disabilities and Substance Abuse; Director, Community Life Council; Community Resource Council for Piedmont Correction Center. Her committee Assignments included Member, Aging, Appropriations, Appropriations Subcommittee on Education, Financial Institutions, and Judiciary I. During her service as a Legislator, Charlotte achieved many awards including: The Order of the Long Leaf Pine, from N.C. Governor James G. Martin; Distinguished Service Award from the Rowan County Republican Party; Appreciation Award, Rowan Mental Health Coalition; Beginnings (Parents of Hearing Impaired Children) President’s Leadership Award; Outstanding Legislator Award, N.C. Alliance for the mentally Ill; Valand Award for Outstanding Legislator in the Cause of Mental Health, Mental Health Association in N.C.; Outstanding Representative Leadership Award, NC Council of Community Mental Health, Developmental Disabilities, and Substance Abuse Programs; 1995 Legislator of the Year, N.C. Alliance for the Mentally Ill; David T. Flaherty Merit Service Award; Great and Powerful Oz designation, N.C. Pharmacist Recovery Network. Charlotte was a guest of the President and Mrs. Reagan at a luncheon held at the White House in 1984. She also attended the Inaugural Ball in 1985 for President Ronald Reagan and Vice-President George Bush. Most people wouldn’t find any spare time with a schedule like Charlotte’s, but she found a way to garden throughout her life which is exhibited by the many beautiful roses and flowers surrounding her home. She enjoyed spending time with friends and was a member of the Red Hat Society. She is survived by three sons, Terrence (Terry) Gardner of Pittsboro, NC, Timothy (Tim) Gardner (Kerry) of Salisbury, Thomas (Tom) Gardner of Roxboro, NC, and a daughter, Leslie Gardner Tully (Mike) of Snellville, Georgia. She is also survived by a grandson, Garrett Gardner of Salisbury, and five granddaughters, Katie Gardner Nickerson (Stephen) of Mt. Pleasant, SC, Mallory Gardner of Wilmington, NC, Victoria (Tori) Gardner of Dallas, TX, Savannah and Chloe Tully of Snellville, GA. Additionally, she is survived by two greatgrandchildren, Brooks Barger and Harper Lennox Nickerson. A Mass of Christian Burial will be held at 11:00am on Wednesday, June 17 at Sacred Heart Catholic Church by Father John Eckert with burial to follow in the church cemetery. Memorials: In lieu of flowers, please make donations to Sacred Heart Catholic Church Memorial Fund, 375 Lumen Christie Lane, Salisbury, NC 28147. Summersett Funeral Home is serving the Gardner family. Online condolences may be made at www.summersettfuneralhome.com.

Charlotte Ancher Gardner, 88, passed away on June 10, 2020, at the Tucker Hospice House in Kannapolis, NC. Mrs. Gardner was born November 14, 1931 in Baltimore, Maryland to Marcel and Charlotte Knapp Ancher. She was preceded in death by her... View Obituary & Service Information

The family of Charlotte Ancher Gardner created this Life Tributes page to make it easy to share your memories.

Send flowers to the Gardner family.