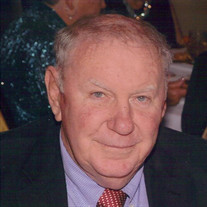 Charles Eugene Little, age 79, of Salisbury, passed away on December 3rd at the Glenn A. Kiser Hospice House in Salisbury, with complications from cancer. He was born on July 7, 1942, to Earl and Helen Little of Altoona Pennsylvania. A 1960 graduate of Altoona High School, he was an educator and coach. Coach Little is survived by his wife of fifty-six years, Phyllis Hefner Little. In addition to his wife, he is survived by his sisters-in-law, Charlene Hefner Hendrix of Conover, Pauline Hefner Pope (Larry) of Hickory, Millie Hefner Martin (Brent) of Claremont, Crystal Sipe Hefner; nieces, Laurie Hefner Jacobs of China Grove and Wendy Martin of Claremont; nephews, Dale Pope of Conover, Todd Hendrix and Darrin Hodge of Hickory, Eric Hefner of Newton and Patrick Hefner of Conover. He is also survived by his nephews in Pennsylvania: William Little of Williamsburg, PA, Michael Little and Steven Little of Altoona, PA, Thomas Little of Hollidaysburg, PA, and sister-in-law, Barbara Wineland Little of Duncansville, PA. He was a member of the 1959 Western Pennsylvania football team and played in the East-West All Star Game. He was a graduate of Catawba College and was a four-year starter on the football team, playing both offense and defense. An avid supporter of Catawba, he served two terms as President of Catawba Chief Club, and is a member of the Catawba College Hall of Fame. He cherished his time at Catawba and maintained a close bond with his fellow teammates throughout the years. His love for Catawba football was evident as he formed a special organization, the Gridiron Club, to unite former players and friends of Catawba football, for the sole purpose to aid and support the program. He coached many sports and was proud of the young men he coached through the years. Many went on to receive college scholarships. He was especially proud to be close friends with his fellow coaches who became his life-long friends. He was a member of First United Church of Christ,and was an active member of his neighborhood organization. A service to honor his life will be held on Monday, December 6, at 11:00 on the lawn at First United Church of Christ in Salisbury. A reception will follow in the Church fellowship hall, with Covid protocol measures in place. Memorials may be made to: First United Church of Christ, 207 West Horah Street, Salisbury, NC 28144 or Charles E. Little Scholarship, care of Catawba College, 2300 West Innes Street, Salisbury, NC 28144. Summersett Funeral Home is serving the Little family. Online condolences may be made at www.summersettfuneralhome.com.

Charles Eugene Little, age 79, of Salisbury, passed away on December 3rd at the Glenn A. Kiser Hospice House in Salisbury, with complications from cancer. He was born on July 7, 1942, to Earl and Helen Little of Altoona Pennsylvania. A 1960... View Obituary & Service Information

The family of Charles Eugene Little created this Life Tributes page to make it easy to share your memories.

Charles Eugene Little, age 79, of Salisbury, passed away on December...

Send flowers to the Little family.