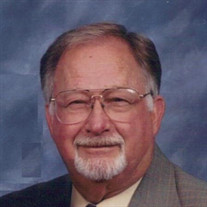 Charles Calvin Jennings, 84, of Salisbury, NC passed away Wednesday, December 30, 2020 at the NC State Veterans Home. Born September 6, 1936 in Orlando, Florida, he was the son of the late Eula Walker Jennings and Vernon Elvis Jennings. He was a veteran of the U.S. Air Force. Mr. Jennings worked as a Bus Driver for Greyhound and auxiliary Police Officer for the City of Salisbury. After his retirement with Greyhound, he began a career in the trucking industry. He was a member of Kannapolis Church of God where he was involved with engineering and sound. Charles loved to ride and care for horses. He never missed a special event, recital or ball game his grandchildren participated in. He enjoyed watching NASCAR racing and western movies. Although quiet, Charles always had a quick sense of humor. In addition to his parents, Charles was preceded in death by his wife, Patricia Lavender Jennings and his brothers, Elvis Jennings, Arthur Jennings, and Donnie Jennings; sisters, Margie Hackney , Sarah Huie, Bonnie Cotter. Those left to cherish his memory are his children; Mark Jennings and wife Rebecca; daughters, Sherry Elmore, and Karen Brown and husband Paul all of Salisbury; brothers, Fred Jennings and wife Shirley and Sam Jennings and wife Donna all of Salisbury; and sisters, Dorothy Tucker and husband Terry of Winston-Salem, and Mary Carswell and husband Bill of Lenoir; grandchildren, Blake Abernathy of Cornelius, Brynn Hunter and husband Nick of Charleston, SC, Kyler Brown of Nashville, TN, Hunter Ingold of Salisbury and Griffin Elmore of Nashville, TN; great-grandchildren, Cadence Abernathy, Sumner Hunter and Grace Hunter. A Graveside Service for immediate family and close friends will be held 9 AM - Saturday (Jan. 2, 2021) at Salisbury VA National Cemetery, Statesville Blvd location. COVID restrictions require everyone to wear a mask at the Salisbury VA National Cemetery. Military honors will be conducted by United States Air Force. A special thanks to all the staff of the NC State Veterans Home, who became an extension of the family; for all the love and care they gave Charles. In lieu of flowers memorials may be made to Kannapolis Church of God, 2211 West A Street, Kannapolis, NC 28081. Summersett Funeral Home is serving the Jennings family. Online condolences may be made at www.summersettfuneralhome.com.

Charles Calvin Jennings, 84, of Salisbury, NC passed away Wednesday, December 30, 2020 at the NC State Veterans Home. Born September 6, 1936 in Orlando, Florida, he was the son of the late Eula Walker Jennings and Vernon Elvis Jennings. He... View Obituary & Service Information

The family of Charles Calvin Jennings created this Life Tributes page to make it easy to share your memories.

Send flowers to the Jennings family.