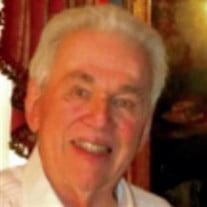 Charles Alexander Bernheim passed away very peacefully on July 20, 2021 at 9:33pm, surrounded by his loving wife and children. Charlie, as he was known to friends, or Cha Cha, as his family called him, was born in New York City on May 14th, 1935. He grew up in Manhattan where he attended the Walt Whitman school, Allen-Stevenson, and graduated from Lawrenceville and Princeton University, where he remained a loyal and dedicated Tiger through the years. Charlie served as a Lieutenant in the United States Navy, where he was trained in intelligence service. After serving, he joined his late father and brother, in the family brokerage business, Stern Lauer. He later moved to Bear Stearns, and finished out his career at JP Morgan Chase. Charlie is survived by his loving wife, Rachel Wallace Oestreicher Bernheim; his daughters, Samantha Haspel Ring (Robert) and Ashley Haspel (Eric Sherman), adored Grandson Leo Charles Myers, and many other loving family, and friends, from all over the world. He relished becoming a father to two teenage daughters, who kept him on his toes and loved him as their own. He adored his grandson, Leo, who loved to smother him in hugs and kisses. Charlie was an avid golfer, a gourmet, a lover of the good life, and a devout collector of fine art and music. He was a true philanthropist, who supported multiple charities and served on many boards, including the Salisbury Symphony. He loved numbers and could sit and look at a stock market ticker all day long. He traveled the world and lived a great life. He was proud to call both Salisbury and New York home, and his memory will be treasured by all whom he touched. There will be a private graveside service for the family, followed by a reception at the family home from 4-7 PM Friday (July 23). Because of the Delta variant, we ask that everyone be masked. In lieu of flowers the family requests that charitable contributions be made in Charles’ honor to the Novant Rowan Hospital Foundation, The Salisbury Symphony, Rowan Helping Ministries, or the charity of your choice. The family wishes to thank, Tonya Parker, Jean Jones, Linda Brown, Dottie Miller, and Teresa Jacobs for the tender and loving care they gave Charles. Summersett Funeral Home is serving the Bernheim family. Online condolences may be made at www.summersettfuneralhome.com.

Charles Alexander Bernheim passed away very peacefully on July 20, 2021 at 9:33pm, surrounded by his loving wife and children. Charlie, as he was known to friends, or Cha Cha, as his family called him, was born in New York City on May 14th,... View Obituary & Service Information

The family of Charles Alexander Bernheim created this Life Tributes page to make it easy to share your memories.

Send flowers to the Bernheim family.