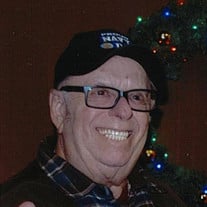 Mr. Carmelo “Carman” John Allegrezza, 81, of Salisbury passed away on Sunday, December 20, 2020 at Novant Health Medical Center. He was born on March 4, 1939 in Port Jefferson, NY to the late Anthony Allegrezza and the late Sara Mazzarelli Allegrezza. Carman was a Funeral Director for 35 years and was the owner and manager of C. J. Allegrezza Funeral Home in Bay Shore, NY and the O.R. Davis Funeral Home, Inc. in Smithtown, NY. After leaving the funeral business, he moved to Pine Brush, NY where he worked as a car salesman until his retirement. In high School, he was an All-Star wrestler and still enjoyed going to high school and college wrestling matches. In his younger days he was a volunteer fireman, a member of the Elks Lodge and the Rotary Club. He was a car collector and owned a 1924 Model T, a 1940 Ford, a 1946 Ford, a 1964 Ford Falcon, a 1941 Mack firetruck and a 1937 Plymouth Street Rod. As a member of the L.I. Nostalgic Car Club, He cruised to the Street Rod Nationals in Minnesota, Oklahoma, Kentucky and Ohio. He was a sportsman and enjoyed deer hunting and Duck Hunting in Maine and New York and Deep-Sea fishing in Florida and New York. He was a member of Corriher Heights Baptist Church. Surviving are his wife of 39 years, Charleen Bedell Allegrezza, Sons: Anthony Allegrezza and Timothy Allegrezza, Daughter: June Miller and husband Frank, Three grandchildren: Michael, Christopher and Arianne. Sister: Frances Stumpf and Dear Friend: Shirley Carpenter. The family will receive friends from 1:00PM-2:00PM on Saturday, December 26, 2020 at Corriher Heights Baptist Church. A Memorial Service will follow at 2:00PM with Pastor Jeremy Collins and Preacher Rick Thomas officiating. Masks and Social distancing are strongly encouraged. Memorials may be made to Corriher Heights Baptist Church, 1980 NC Hwy. 153, China Grove, NC 28023. Summersett Funeral Home is serving the Allegrezza family.

Mr. Carmelo &#8220;Carman&#8221; John Allegrezza, 81, of Salisbury passed away on Sunday, December 20, 2020 at Novant Health Medical Center. He was born on March 4, 1939 in Port Jefferson, NY to the late Anthony Allegrezza and the late Sara... View Obituary & Service Information

The family of Carmelo John Allegrezza created this Life Tributes page to make it easy to share your memories.

Send flowers to the Allegrezza family.