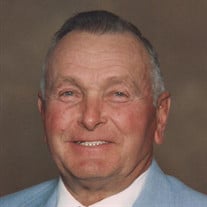 Mr. Bobby “Bob” Gene Cranford, age 90, of Woodleaf, passed away peacefully on July 18, 2020 at the Gordon Hospice House in Statesville, NC. Born on April 12, 1930, Bob was the son of the late Nephi and Helen Lyerly Cranford. He attended Woodleaf School. Bob served in the US Army from 1951 – 1953 during the Korean War and was stationed in Germany with the B452nd in the Armored Field Artillery division which specialized in a 155mm howitzer. Upon discharge he received the Occupation Medal. After being discharged, he came home and married Nellie Elizabeth Wooten. They were married for 32 years until her death in 1985. Bob and Nellie had two children, Janet Cranford Thompson and Larry Marvin Cranford (Linda). Bob was later married to Ann Ridenhour Boger for 33 years. Bob was a lifelong member of South River United Methodist Church, serving in many positions throughout the years. He often cleaned the church driveway of snow and always enjoyed providing a hayride for the church youth. Mr. Cranford spent his life as a carpenter, building many houses in Rowan, Davie, and Iredell counties. He built many things that helped make his job easier as a carpenter, such as a forklift. He looked to his brothers for help in the mechanical and welding areas. It was a running joke among the Cranford clan that if you told one brother that his brothers said it couldn't be done, it would get done. He had an inventive mind and was always figuring out how to build something, even building an electric crank ice cream freezer (1960's) so he could have sufficient quantities of homemade ice cream. Bob enjoyed telling jokes and making people laugh. For several years he hosted chicken stews and pinto bean suppers for all his friends and neighbors, cooking as much as 30 gallons each time. In addition to his parents and first wife, Nellie, he is preceded in death by brothers, Roy (Dick) Cranford and Jerry Cranford, brothers-in-law John Wooten and Jack Wooten. Mr. Cranford is survived by his children, Janet and Larry (Linda), his grandchildren, John Thompson (Erin), Ryan Thompson, Laura Mabry (Chris), Aaron Cranford (Taylor Rogers), and Allison Watson (Jake). Great-grandchildren include Mason Smith, Evelyn Thompson, Bennett Thompson, and Landyn Mabry. Also surviving Bob are his youngest brother, Don Cranford (Susan) and sisters-in-law Dollie Cranford, Dorothy Cranford and Betty Wooten. Special thanks goes to his daily caregivers, Caitlin Allen, Laken Collins, Barbara Fitzgerald, Cassi Lippard, Elsie Nisley, and Stephanie Allison. Visitation: Drop in viewing is available on Tuesday, July 21, 2020 from 8:30am – 5pm at Summersett Funeral Home in Salisbury, NC. Service: A graveside service will be held on July 22, 2020 at 10am in the South River United Methodist Church cemetery with military rites, officiated by Rev. AJ Moore, Rev. Tom Mabry, and Tim Kelty. Pall bearers will be Aaron Cranford, David Lee Johnson, Chris Mabry, John Thompson, Ryan Thompson, and Jake Watson. Memorials: In lieu of flowers, donations may be made to South River UMC for the Cemetery Endowment Fund or the South River Preschool, 2880 South River Church Road, Woodleaf, NC 27054. Summersett Funeral Home is serving the Cranford family. Online condolences may be made at www.summersettfuneralhome.com.

The family of Bobby "Bob" Gene Cranford created this Life Tributes page to make it easy to share your memories.

Send flowers to the Cranford family.