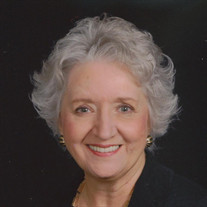 Betty Dan Nicholas Spencer died Sunday morning, December 13, 2020 at Novant Health Rowan Medical Center. Betty Dan was the daughter of the late Murtis Lucille Maynard and Dan Miller Nicholas. She was was born on January 28, 1936. Betty Dan was educated in the public schools of Salisbury and a member of the Class of 1954 of Boyden High School. She attended Randolph-Macon Woman’s College in Ashland, Virginia and Northwestern University in Evanston, Illinois. Betty Dan served on numerous local boards and commissions including the Rowan Museum (Charter member), Brown-Fisher Association (Charter Lifetime member), Dixonville/Lincoln School Task Force, Rowan Public Library Foundation Board, Historic Salisbury Foundation, City of Salisbury Public Art Committee, Rowan County Parks & Recreation Board and Historic Fayetteville Foundation (Charter Lifetime member). She was a member of First United Methodist Church, Waterworks Visual Arts Center, Travelers’ Club and The National Society of the Colonial Dames of America. Betty Dan’s extensive research and collection of photographs on Dixonville was displayed in 2007. In 2008, Betty Dan was awarded the Martin Luther King Humanitarian Award for her “selfless contributions to impact the lives of others”. In 2015, she was recognized for work in establishing the Dixonville/Lincoln School Community Association. Betty Dan was an accomplished Researcher and Historiographer. She spent countless hours researching the history of Rowan County including founding families, buildings, and events. She organized and catalogued every photo and detail of her research. She also created inventories of numerous forgotten cemeteries in Salisbury, which included compiling the stories of the individuals buried there. She made most of her notes in her meticulous and recognizable handwriting. Her interest in research began with her own ancestor, Michael Braun (Brown), and his twelve children, which led her to record the genealogy of many local families and businesses. She researched and documented the history of Goodman Lumber Company for their 100th Anniversary. She compiled the history of the Wallace Family home on Fulton Street and most recently organized the archives of the Holmes-Hurley Family. She published two books, Remembering Dixonville and East End: Salisbury, North Carolina (2007) and Tapestries of Faith: The Liturgical Banners of First United Methodist Church (2017). She made many presentations to non-profit groups, city agencies, and families about Rowan County history. In 2017, she presented the history of the Empire Hotel before its renovation. Betty Dan was blessed to be both right-brained and left-brained and to excel at both. She was analytical, logical, and organized as well as creative, artistic, imaginative, and intuitive. She studied music in college, and was a concert-level pianist. She owned a gift shop, B.D. Originals, in Fayetteville and Salisbury, where she would search for and select unique items from all over the world for her customers. She took great pride in being sure that every gift was perfectly gift-wrapped, a signature of her store. Betty Dan was a collector herself. She collected postcards, miniatures, Santas, and manger scenes from all over the world. She admired the talent of others and loved the intricate details of her collections. She also started many collections for her children, nieces, and nephews. Christmas was her favorite time of year. She meticulously decorated every room in her house with her beautiful Christmas collection. She loved to entertain her family and friends during the holidays. She would often play the piano as her guests sang carols. She generously opened her home during Christmas for many successful fundraisers and tours to benefit charities such as The Junior Charity League of Fayetteville and the American Cancer Society. But most of all, Betty Dan was a vault of knowledge. She was willing to help everyone that asked her with their family’s research, often answering questions off the top of her head. She could cite dates and historical events without assistance of books. She loved to tell her children and others about the incredible history of our city, state and country. Betty Dan was proceeded in death by her parents, a sister, Barbara Nicholas, and brother, Richard Maynard Nicholas, and her husband of 27 years, John Robert “Bobby” Spencer. She is survived by her five children, Anne Scott Gilliam Clement and husband, Donald Clement III, of Salisbury; Mary Duane Gilliam Hale and husband, Charles Herbert Hale, Jr., of Morehead City; Melene Nicholas Gilliam Hatcher and husband, Walter Benjamin Hatcher, of Fayetteville; Murtis Maynard Gilliam Worth and husband, Walker Yeatman Worth III, of Fayetteville; Joseph Duane Gilliam, Jr. and wife, Jan McDonald Gilliam, of Fayetteville; her step-son, John Robert Spencer, Jr. and wife, Laura Tripp Spencer, of Charlotte; eight grandchildren: Tyler Laurence Speir and Ruth Nicholas Clement of Salisbury; Mary Charles Hale and Charles Herbert Hale III of Morehead City; Laura Anne Hatcher, John “Jack” Gilliam Keefe, and Walker Yeatman Worth IV of Fayetteville, and Rebecca Keefe Kwasnick and husband, William Joseph Kwasnick, of Pinehurst; and two great-granddaughters Marlee Eva-Melene Speir and Mary Gilliam Kwasnick; and a niece, Elizabeth Ellen Nicholas. She is also survived by sister-in-laws, a brother-in-law, cousins, nieces, nephews, and a close circle of friends that she loved like family. SERVICE: A private graveside service will be held on Thursday, December 17 at Chestnut Hill Cemetery. MEMORIALS: Memorials may be made to Betty Dan Nicholas Spencer Endowment Fund, Rowan Public Library, 201 W. Fisher Street, Salisbury, NC 28144, or to a charity of the donor’s choice. Summersett Funeral Home is serving the Spencer family. Online condolences may be made at www.summersettfuneralhome.com.

The family of Betty Dan Nicholas Spencer created this Life Tributes page to make it easy to share your memories.

Send flowers to the Spencer family.