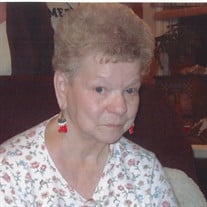 Barbara Livengood Trexler, 81, of Salisbury passed away Wednesday, November 25, 2020 at the Novant Health Glenn A. Kiser Hospice House. Born June 23, 1939 in Salisbury, she was the daughter of the late James Monroe Livengood and Annie Tutterow... View Obituary & Service Information

The family of Barbara Livengood Trexler created this Life Tributes page to make it easy to share your memories.

Send flowers to the Trexler family.