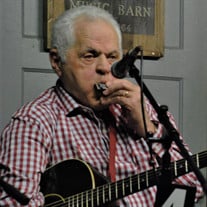 Banner Smith passed away on August 19th, 2020 in Flowery Branch, GA at the age of 92. He was born on June 8th, 1928 along with his identical twin brother Kennett to Bill and Sarah Smith in Greensboro, NC. In addition to his parents and four siblings, he was preceded in death by his wife of 65 years, Jean Hoffner Smith of Salisbury, NC, and one of his grandsons, Shane Smith. Banner served in the U.S. Army from 1946-1949, and was stationed in occupied Japan after WW2. He was an accomplished Golden Gloves boxer as well as a middle-distance runner in his youth, and he qualified for the 1948 Olympic trials in the 1500 meters. A proficient guitarist and singer, he was known for playing the harmonica with a neck holder while picking his 1950 Gibson that he never replaced. Banner kept a large notebook in which he had written the words to old mountain/bluegrass songs that he played throughout his life. Banner and Jean raised their family in Tucker, Georgia. They were active members of Tucker First United Methodist Church, and belonged to the Christian Friendship Sunday School Class for 50 years. In later years, he was proud to be one of the oldest members participating as a musician in the Church Street Station Band. Banner retired from the Engineering Department at AT&T in the early 1990’s after working with them throughout most of his life. He is survived by five children - Colin Smith (Shelley), Leonard Smith (Jan), Melinda Knowles (Andy), Maureen King (Bill), and Kyle Smith, along with 11 grandchildren and four great-grandsons. Banner was a humble man of strong moral character who always put others before himself, and strove to live according to the teachings of Jesus. He was well respected and loved by all who were fortunate enough to know him. A graveside service will be held at 11:00 AM on Saturday, August 22nd at the City Memorial Park Cemetery in Salisbury, North Carolina. In lieu of flowers, contributions may be made to Tucker First United Methodist Church, Tucker, Georgia. Summersett Funeral Home is serving the Smith family. Online condolences may be made at www.summersettfuneralhome.com.

Banner Smith passed away on August 19th, 2020 in Flowery Branch, GA at the age of 92. He was born on June 8th, 1928 along with his identical twin brother Kennett to Bill and Sarah Smith in Greensboro, NC. In addition to his parents and four... View Obituary & Service Information

The family of Banner Smith created this Life Tributes page to make it easy to share your memories.