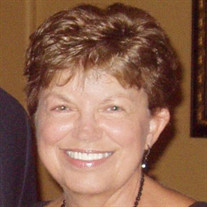 Ann Marie Sachtleben, loving wife and mother of two children, peacefully died at age 80 in her home while surrounded by her husband and sons holding her hands. Ann was born on May 25, 1941 in Saginaw, Michigan to Emanuel and Lydia (Dietz) Schaefer. Ann’s mother died when Ann was 2 years old and she was then, lovingly cared for by her 12-year-old sister, Judy. When Ann was 6 years old, she was adopted into her Uncle Rinnie and Aunt Arline’s family where she grew up with her two cousins, Larry and Dan. She was baptized and confirmed in Trinity Lutheran Church in Cheyenne, Wyoming. Following her graduation from Cheyenne High School in 1959, Ann moved to Kansas City and began work with TWA. Two years later, at the encouragement of one of her roommates and friend from the congregation in Kansas City, she enrolled in St. Paul’s College in Concordia, Missouri and received her Associate of Arts degree. Following graduation she enrolled in Concordia University, Park Ridge, Illinois and received her Bachelor of Arts degree in 1965. Ann taught 12 years in public, Lutheran and Catholic parochial elementary schools. Ann then received a Master of Arts and Teaching degree from Webster University in St. Louis, Missouri. Later in her career, she taught elementary classes in Salisbury Academy and then taught part-time for eight years in a special program of workplace education for Rowan Cabarrus Community College. Ann was a very active member of the Church congregations she belonged to throughout her life and was a true partner with her husband Carl’s pastoral calling. Ann and Carl R. Sachtleben were married June 25, 1966 at Trinity Lutheran Church in Cheyenne, Wyoming. They have two sons, Michael and Stephen. Michael resides in Great Falls Virginia with his wife, Joanna and their three children Hannah, Sam, and Jake. Stephen resides in Charlotte, North Carolina with his wife, Christina and their two children, Elisabeth and Joseph. Ann and Carl loved to travel and have many friends in Germany. They enjoyed numerous trips to many countries in Europe, Great Britain, Mexico, and a number of Caribbean islands. Working with 2nd and 3rd graders was one of her great joys. She was creative in the classroom, responsive to children’s needs, and listened carefully to parents. While teaching employees in area factories for the community college she received a wonderful response from one of the workers who joyfully told Ann, “Because of you, I can now read and write cards and messages on my own to my grandchildren.” Ann was preceded in death by her mother, Lydia, her sister Judy Gardai, her parents Rinnie and Arline Dietz, her brother Larry Dietz. She is survived by her husband Carl, by her sons Michael and Stephen, her grandchildren Hannah, Sam, Jake, Elisabeth and Joseph, and her brother, Dan Dietz. Visitation: 4-6:00 PM Thursday, December 16 at Summersett Funeral Home. Memorial Service: 12 Noon Friday, December 17 at St. John’s Lutheran Church conducted by Rev. Dr. Rhodes Wooley with inurnment to follow in the church columbarium. In remembrance and thanksgiving for Ann’s life, the family suggests that any charitable contributions be made to St. John’s Child Development Center or to a charity of your choosing. Summersett Funeral Home is serving the Sachtleben family. Online condolences may be made at www.summersettfuneralhome.com.

Ann Marie Sachtleben, loving wife and mother of two children, peacefully died at age 80 in her home while surrounded by her husband and sons holding her hands. Ann was born on May 25, 1941 in Saginaw, Michigan to Emanuel and Lydia (Dietz) Schaefer.... View Obituary & Service Information

The family of Mrs. Ann Marie Sachtleben created this Life Tributes page to make it easy to share your memories.

Send flowers to the Sachtleben family.