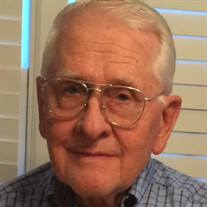 Abram Dyck, 88, of Concord passed away on Wednesday, July 8, 2020 at the Bob and Carolyn Tucker Hospice House in Kannapolis, North Carolina. Born on December 8, 1931 in Luster, Montana, he was the son of the late Peter and Tina Dyck. In addition to his parents, he was preceded in death by 5 sisters and 5 brothers. Those left behind to cherish his memory are Velma Flynn Dyck, his childhood sweetheart and wife of 67 years; daughters Susan Anderson (Bryan) Casper Wyoming, Cindy D. Collinge of Huntersville, North Carolina, Cheryl Dyck of Concord, North Carolina; grandchildren Abbey Reed, Stephanie Reed, Laura Collinge, Ryan Collinge and Kayla Dyck. He was a veteran of the U.S. Air Force, and was stationed in Thule, Greenland. Abe was an aircraft mechanic by trade and a man who could fix anything. Throughout his life his family was the most important thing to him. Memories of special vacations and time spent together will be cherished by all. He never met a stranger. His quirky jokes will be remembered by all. His favorite treat was a big bowl of ice cream with hot fudge, which he ate most every night. A memorial service will be held at 10:00 a.m., on July 16th at Summersett Funeral Home, 1315 West Innes Street, Salisbury North Carolina. Military service following at 11:00 a.m.at Salisbury National Cemetery. Military honors will be provided by the Rowan County Veterans Honor Guard and the U.S. Air Force. Due to COVID19 there will be no viewing and we ask that masks be worn. Many thanks to the staff at Tucker Hospice House who took such wonderful care of Abe during his time there. In lieu of flowers, the family is requesting that donations be made in Abe Dyck’s name to Tucker Hospice House, 5005 Hospice Circle, Kannapolis, North Carolina 28081. Summersett Funeral Home is serving the Dyck family at this time. Online condolences may be made at www.summersettfuneralhome.com.

Abram Dyck, 88, of Concord passed away on Wednesday, July 8, 2020 at the Bob and Carolyn Tucker Hospice House in Kannapolis, North Carolina. Born on December 8, 1931 in Luster, Montana, he was the son of the late Peter and Tina Dyck. In... View Obituary & Service Information

The family of Mr. Abram Dyck created this Life Tributes page to make it easy to share your memories.

Send flowers to the Dyck family.